Shimmy school came about as a way to bring together dancers in the community of Sheffield.

It has resulted in the formation of many great friendships from people who have found a love of belly dance and the deep culture and meaning behind the dance.

By coming to classes you can just dip your toe into the waters of belly dance and use it as a fun way to get fit or (as is usually the case) get as involved in the belly dance community as you like and fall in love with the dance and everything that comes with it. 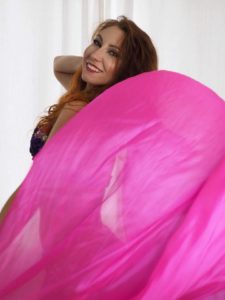 Eleanor started her belly dance journey at just 10 years old in an after-school club. She then went on to learn from Jenny Muhlwa at age 14 and started teaching Belrobics classes for Jenny at age 16. Eleanor found a passion for performance and began to perform belly dance professionally in local restaurants at aged 18.

During her time at university and and whilst still performing in restaurants, Eleanor started teaching her own class. This class became popular and Shimmy School was born!

When Eleanor graduated university in 2015, Shimmy School moved with her to Sheffield where classes grew and the number of sessions in the week exploded! Today Shimmy School teaches an average of 110 people per week from all walks of life!

Shimmy Shows is a more recent addition to the CV! Eleanor has been performing professionally since the age of 18 and has gone on to play the lead in Sleeping Beauty the Belly Dance (2012), dance on ITV, BBC and Sky1, dance in music videos, work on board cruise ships for HAL and TUI, dance and corporate events, weddings, festivals and much more! Eleanor is very dedicated to her ongoing training having weekly private classes at Hype Dance in Ballet and travelling the globe to gain knowledge from the world’s best teachers. Eleanor recently won the first Scholarship to train at Cairo Festival in Budapest with Mercedes Nieto, she also has been working in Cairo yearly for Randa Kamel at Raqs Of Course where she takes lessons from the leading teachers in Belly Dance as well as continuously taking fitness courses to better her teaching.

Eleanor’s most recent achievement is directing and choreographing the 90 strong cast production of Aladdin the Belly Dance. The motivation behind the production being Eleanor’s desire to raise the profile of belly dance, to develop the community of dancers here in Sheffield and to connect with different groups who would not otherwise have the chance to work together. 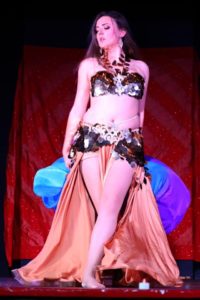 Natasha is a founding member, teacher and choreographer for Shimmy School.
She has been dancing for 12 years and has studied a wide variety of styles in the UK and internationally including whilst working in Cairo for Raqs of Course festival.
Natasha also has been dancing professionally for 6 years at events ranging from restaurant entertainment to weddings and corporate events. Her professional highlight so far has been working in the Middle East on board Marella’s Discovery Cruise ship in April of this year and playing the one of the lead characters “Jafara” and choreographing scenes in Shimmy School’s sold out production of Aladdin the Belly Dance in December 2019. 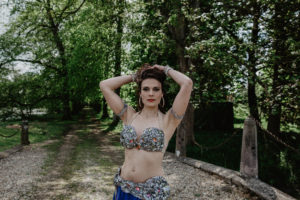 Julia is an experienced teacher and performer at Shimmy Shows with 15 years of dance under her shimmy belt!

Dancing as part of Shimmy Shows, Julia performs in restaurants, weddings and other performances as both solo and as part of the troupe enabling her to connect with her audience through energetic and entertaining dance. Her love of Oriental dance has blossomed over the years and she continuously works on developing her dance style and technique through 1-2-1 private sessions, attending workshops and being inspired by other dancers across the globe.

Rebekah Moon has been dancing for just over two years, and working as a dancer for about a year.
Within this time, she discovered a true passion and dedication for it. It has been a source of great healing for her, and she was drawn to how expressive and joyful this dance can be.
She loves belly dance because it is beautiful, challenging and so emotive, and when dancing it is profoundly freeing. Having studied other creative paths, such as art, music, and writing, Rebekah feels that dance is truly something she was always meant to do. 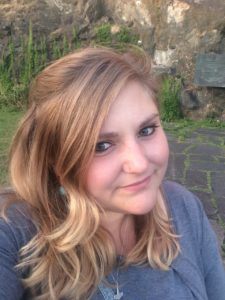 Nat began belly dancing for fitness in 2016, she had always loved dance and used to enjoy social Salsa and Ballroom dancing in Woodseats. She fell in love with Belly dance and since then she has joined the Shimmy School community dance troupe and began performing with them in 2018. Nat says “Being on the bigger side, I’ve never felt like I fit dance ideals. Belly dancing and Shimmy School have helped immensely in building my confidence, after all you need a belly to belly dance!” Nat loves the confidence that Belly Dancing gives her and wants to help other people feel the same so has recently begun to teach.

Nat is an incredibly important cog of the Shimmy School team and keeps us all in check with her fabulously organised ways. 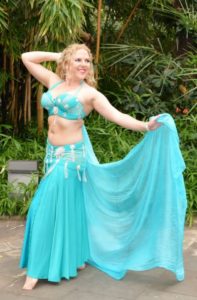 Helen Caballero’s love of dancing began with her first Salsa class in 2003. She especially enjoyed Cuban style and joined the salsa team ‘Amigos de la Rueda’, with whom she travelled to Havana, Amsterdam and Gothenburg to study and perform. Helen then added Tango to her repertoire whilst working in Buenos Aires in 2007.

Helen moved from Latin dances to bellydance in 2010 and has worked as a professional bellydancer in restaurants for several years. Helen especially loved teaching her own classes and choreographing performances for dance festivals. She has now retired from bellydance performance but is delighted to be able to contribute to Aladdin by writing and performing the script as the Narrator. The highlight of her bellydance career was dancing on the same stage as Didem at Sultana’s in Istanbul! 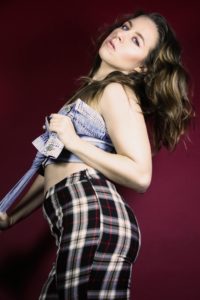 Sarah ‘SHE’ Hobson is a professional dancer, choreographer and tutor. Originating as a Hip Hop artist, Sarah has spent a great deal of time honing her craft; training in styles such as contemporary, jazz, commercial, dancehall and now, Belly dance. Sarah holds a BA (Hons) degree in dance and still regularly trains to stay knowledgeable within her field. Working as a freelance artist Sarah spends a great deal of her time choreographing for different companies and events across the UK, as well as performing regularly within the theatre and commercial industry. She has created award winning choreography and has worked with many people in the industry. Her credits include Jonzi D, Boy Blue Ents, DecaDance, Rationale Productions, Balbir Singh Dance, MTV, Corinne Bailey Rae Britain’s Got Talent, and The Clothes Show. Sarah’s biggest passion comes from being able to share her love of dance through the joys of teaching, which she has been doing for over a decade now. She is eager to encourage children and adults to become dancers at any age! 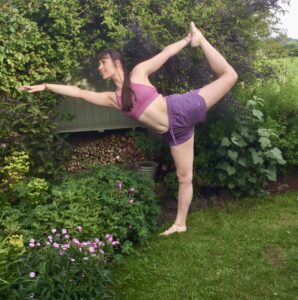 Gwenny Rose grew up in Derbyshire and began dance lessons at the age of four and she has not stopped moving since! Participation and performing experience continued through her school years, studying Cecchetti Classical Ballet during further education.

Over the last eleven years Gwenny has collaborated, choreographed and performed in a variety of settings; from fashion shows to flash mobs, festivals and film. She has worked both independently and with numerous dance and theatre companies across the UK.

Having been exposed to a range of art forms from world music to fine art and costume design through to physical disciplines, such as, capoeira, Acro yoga and classical Indian dance, Gwenny found an ever-increasing enthusiasm and necessity for fitness, health and well-being. With a view to share her knowledge and enjoyment of movement creatively, her work within the fitness industry also plays an important role to sustain a demanding career path.

Continuing to choreograph, collaborate and perform, yoga styles and Pilates are an integral part of her practice. With this knowledge Gwenny has adapted classes for specialist groups such as postnatal exercise, fitness for older people and sessions for the MS society. She currently freelances in dance fitness, ballet-based classes and is a Les Mills Barre and Body Balance advanced instructor. 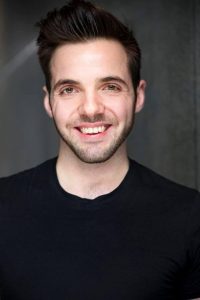 Mark is a group fitness instructor and aspiring actor from Sheffield.

Beginning his acting training at college back in 2010, this lead to Mark developing a passion for dance, where he studied mainly Contemporary and Jazz, and also bits of Hip Hop.

College life was where Mark built up his confidence, not just as an aspiring performer, but also as a person. In his spare time Mark would participate in Zumba classes for a while, and eventually while unemployed in 2011, he decided to take his passion for dance to the next level and train to be a Zumba Instructor himself. This lead to Mark wanting to try other fitness classes and even qualify in other areas, and over the next few years he would qualify in his Exercise to Music, Piloxing, and also Les Mills classes – Body Attack and Body Pump.

As much as Mark loves his fitness career, he believes acting has always been his true calling, and after taking a three year haitus with performing, he came back in 2017, starting off with successfully claiming roles in numerous short films, mainly taking on lead and supporting roles. In the same year, he also picked up acting training again at an independent part time drama school where he still currently trains.

In 2019 Mark got cast as the lead role of Aladdin in Shimmy Schools Bellydance production of the famous tale, where he thoroughly loved the experience and made many new friends for life! Mark got a taste of the theatre life again, which he hasn’t had since he performed with the Manor Operatic Society doing musicals in 2012-2013, and strived to return to Musical Theatre.

Mark managed to grab another role of a lifetime, this time as Corny Collins in a Northern production of Hairspray coming up in 2021 (which has actually been postponed three times due to Covid-19)!

During lockdown Mark has also founded his very own theatre company “MK Theatricals”, where he aims to bring different styles of theatre to the stages of Sheffield, and giving many more hopeful performers the chance to showcase their talents. The first production “Standing at the Crossroads” is scheduled to hit Sheffield in the Summer of 2021. A few of the Shimmy School team members are also part of the first production by MK Theatricals, and Mark hopes he can collaborate more with Shimmy School over the years.

Whilst starting this new venture, Mark still auditions for other productions out there in the UK, focusing on his own acting career, whilst also teaching many fitness and dance classes online, also at the gyms (when they are open), and more recently for Shimmy School itself. 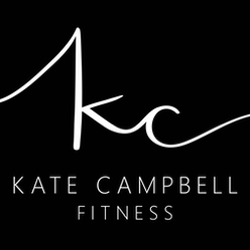 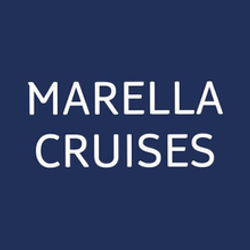 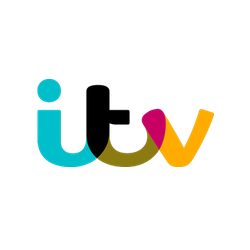 ...to find the sparkle that Shimmy Shows can bring to your event. Learn More